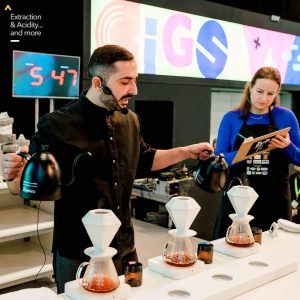 I started working in the coffee industry in 2003 when I graduated from high school and went to university. I did them in parallel for the next 6 years. During this time, I was working in small neighborhood cafés. When I graduated from university, I realized that what I really enjoyed was making coffee so I decided to do it as best I could. In 2010 when I decided that I wanted to work and deepen in coffee, I started working at Danesi Coffee House and for the next 5 years, I worked there. From 2015 until 2020, I worked at Taf as a Barista, Barista Trainer, and seminar presenter.

My involvement with specialty coffee opened a new world for me and I realized that coffee is something different from what I was used to tasting. I also participated in national and world competitions, culminating in the two consecutive third places I won in 2017 in Budapest and in 2018 in Belo Horizonte for the World Brewer’s Cup Championship.

I have participated in many international coffee festivals such as the London coffee festival and the Hotelex in Shanghai. I have visited coffee farms twice: the first was in Brazil and the second in Ethiopia. These trips helped me understand even more about coffee and how all these flavors come from in the final cup. For the last year, I have been working in the training department of the staff of the coffee island stores as a coffee campus specialist.