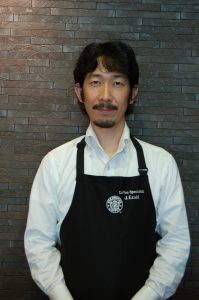 Joji joined Starbucks in as a Barista in 1996, the year Japan opened its first store, and the first market to open in the CAP region. Joji was actively engaged in coffee education and partner coffee engagement whilst working as store manager. In 2001, Joji joined the concept team responsible for opening the first “whole bean only store” in the market, while he also worked to open the first big concept store as store manager. The Concept store featured limited time offerings and a special range of products, Joji held an additional post of store manager and district manager in 2003,  moving into a support center role as Coffee specialist in 2004. Now, he is the leader of coffee education of all 30,000 Starbucks Japan partners.

Joji manages Ambassador’s cup, Barista’s cup, coffee master program and coffee seminars for the market, and he is responsible for whole bean coffee education and engagement for the Japan market.