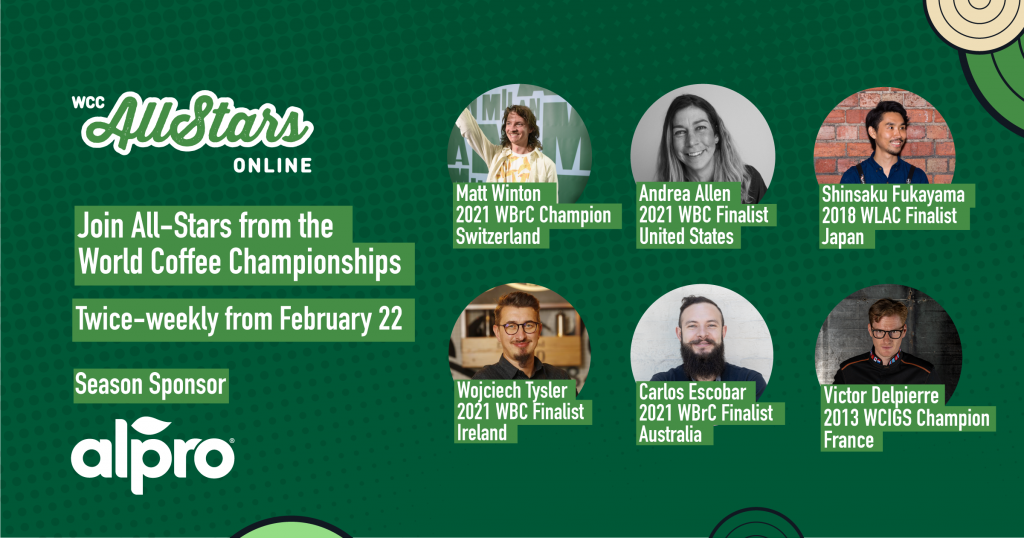 WCC All-Stars Online is returning for a fifth season, with six top-ranking World Coffee Championship (WCC) competitors coming to your screen twice-weekly, beginning next Tuesday, February 22. The All-Stars program celebrates some of the best competitive coffee makers in the world in a fun, engaging format, which we are adapting to bring directly to you.

Each week will focus on a different All-Star from the WCC portfolio, with the World Barista Championship, World Brewers Cup, World Latte Art Championship, and World Coffee in Good Spirits Championship featured this season.

The program is divided into two parts: an episode released on the WCC YouTube channel every Tuesday, where we’ll learn more about the All-Stars, including how to make one of their signature beverages; and an informal chat on Instagram Live hosted by the Barista Guild (BG).

The schedule and All-Stars being featured this season are as follows:

You can subscribe to the WCC YouTube channel to get notified when the episodes are posted. Can’t wait for season five? Catch up with previous seasons of All-Stars Online here.

All-Stars Online is brought to you by season sponsor, Alpro, a certified Danone B Corp company focused on making the best barista-crafted plant-based drinks. The full range consists of the Soya, Almond, Coconut, and Gluten-Free Oat drinks, and have been created with high bar performance and quality in mind, so you’ll be able to find an ingredient that complements your coffee perfectly regardless of flavor profile, processing, origin or roast.